Results of the 2017 JEMA communications survey

We announced the survey to JEMA members via several email announcements, the Winter 2017 Japan Harvest print magazine, and announcements at the 2017 JEMA Connect meeting in February and the JEMA Women in Ministry (WIM) Kanto retreat in March.

Members were given three submission options: complete the survey online, email it, or fax it. This time all submissions came in via the online survey. We received 122 responses—a little lower than the 150 responses we got in the 2012 survey. (For reference, there were 967 JEMA members in 2012 and 985 in 2016.)

Both surveys had seven main questions. Some of the wordings and content categories were changed in the 2017 survey, but the questions were essentially the same. Questions one through three majored on the content of Japan Harvest magazine, whereas questions four through seven majored on internet-related topics.

Q1: How interesting do you find each of the following Japan Harvest regular articles?

Respondents were asked to rate the regular articles on a five-level scale from “Very” (5) to “Not at all” (1). All scored a #5 or #4 by more than half of the respondents (although in the cases of Focus on Prayer and Modern Tech, just barely). Language & Culture was a clear leader with 75% of respondents giving it a #4 or #5. Member Care rated 67% and In the News 66%. 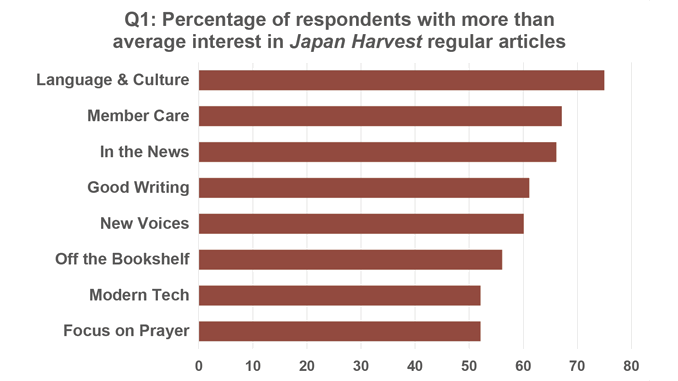 Q2: How interested are you in the following topics? 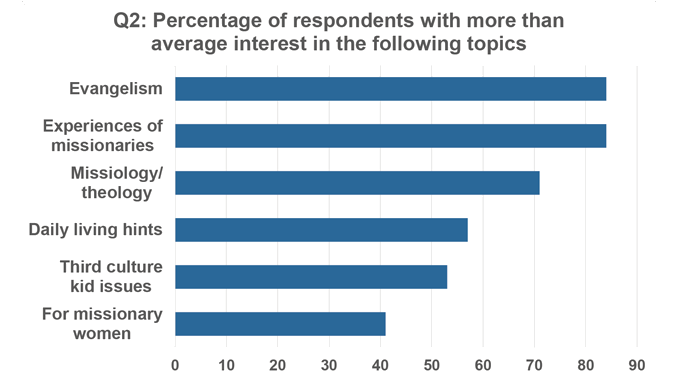 Out of the long list of suggestions we received, there was especially strong interest in areas related to church, contextualization, evangelism, member care, and partnership or cooperation. We cover the responses to this question in greater detail in the second half of this article.

Q4: Tell us which other print and online Christian publications you find interesting or useful.

Comparing the responses of all 122 respondents to those of the 26–40 age group provides some interesting data. (Note: all percentages in the next paragraph are the sum of the #5 and #4 percentages.)

Sixty-one percent of all respondents and 60% of those aged 26–40 gave a response of #5 or #4 for their interest in viewing Japan Harvest articles online. However, with disaster needs, the percentages were 59% (all respondents) and 48% (26–40 year olds). Interest in language study resources was higher in the younger group (64%) than in the entire survey (56%). Japan Christian news came in with 68% for all respondents and 60% for the 26–40 bracket. JEMA mission news interest was 54% for the whole group, but only 40% with the younger group. 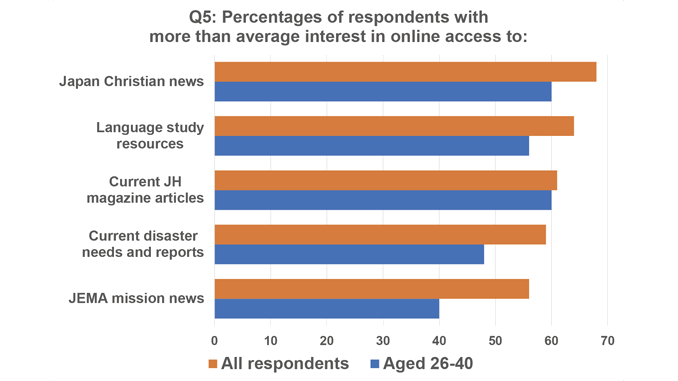 Q6: How often do you access the internet for the following activities: read the news, research/information, and social networking?

Q7: Which devices do you use regularly to access the internet?

Not surprisingly, computers are still the primary access devices—93% of respondents indicated they regularly use a computer to access the internet. But now our members increasingly use mobile devices, as shown on the graph below. Only 21% reported that the computer is their exclusive internet-access device, whereas in 2012 that percentage was more than 50%. 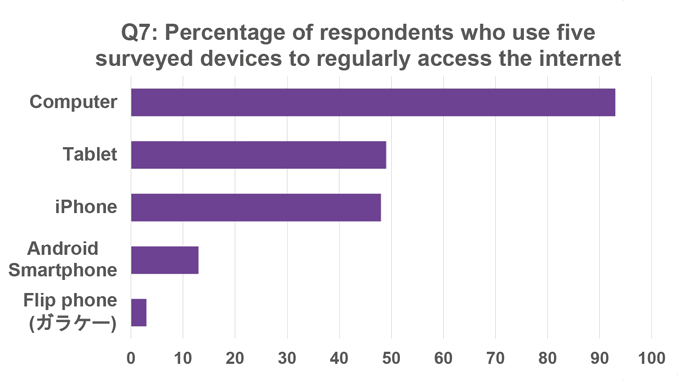 Suggestions for topics to cover

Question three asked respondents to submit up to three topics they would like more coverage of in Japan Harvest. Out of the 122 respondents, just over half (63) submitted topics of interest. Over 100 separate items were submitted. After extensive processing of the data, we settled on 15 categories into which we grouped the responses. In alphabetical order, these are: case studies, church, contextualization, cultural understanding, discipleship, evangelism, history, language learning, member care, news, partnership or cooperation, prayer, recruitment, resources, and stories.

This area overlapped with many other categories, but specifically mentioned in this context was:

Contextualization was mentioned many times from different angles. These included:

Discipleship was mentioned several times. Two questioned whether accountability groups—especially in the area of sexual purity—exist for Japanese people. One respondent reflected that there seems to be a lack of training as to what sacrifice really means.

A wide range of topics were suggested.

We also had a request for articles that acknowledge the increasing number of missionary kids who have one Japanese and one non-Japanese parent, often go through the Japan educational system, and don’t really identify as third-culture kids.

Specifically mentioned were requests for a calendar of upcoming conferences and seminars in the Christian community. Appreciation was also expressed for news articles translated from Japanese.

In 2012, networking was a significant topic, but in 2017, partnership and cooperation seemed to take its place. This included partnership or cooperation between missions and Japanese denominations at the organizational level as well as between individuals coming from different cultural perspectives.

Clear testimonies of answered prayer in Japan were mentioned as possible article topics. One person suggested a series on how to pray for Japan.

We already publish reviews of books in English of interest to missionaries in Japan, but it was suggested we also publish:

Thanks to all who responded. We haven’t been able to cover everything mentioned, but be assured we have read every response and have your thoughts in mind as we seek to improve the JEMA Communications Commission.

If any of the topics listed in this report are about an area you can write about, we’d love to hear from you. Submit your proposal through “Leave a Reply” toward the bottom of this page.

This site uses Akismet to reduce spam. Learn how your comment data is processed.